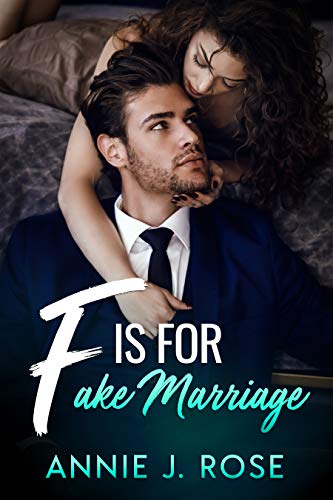 He’s the best bad decision I ever made. It was only one night. A business trip. City lights and passion. Intense. Impossible. He’s my boss. Too bad I can’t forget the night we spent together in Paris. It’s hard enough on my own, dealing with my needy sister and pretending I don’t have feelings for Toby. My genius, alpha male boss with the piercing eyes and rock-hard abs. We acted like it never happened. Until I told him about my crazy ex. The one who’s coming after me. Speaking of crazy, my hot, delectable boss has the craziest idea. A fake marriage. To him. He’ll pretend to be my husband and protect me from my ex. Insane? Or insanely tempting? After the hell I went through with my ex, a little sexual healing may be just what I need. My ex is dangerous. My sister is falling for him, but he’s out to get me. My life is at risk, and my boss, my lover,—he can never find out. Because my fake husband is going to be a real daddy. No matter what it costs me, I’ll keep our baby safe. I’ll never tell him the truth. He’s the only man I’ll ever love. He deserves more than a hot mess with a crazy ex and a secret baby. I’ll never regret what we meant to each other. I’ll cherish our child. And miss Toby, my irresistible alpha boss for the rest of my life.

A Rose For Me by Sage Alexander

A Rose For Me by Sage Alexander

It's Valentine's Day... ...but Ava is getting no love. Not in business or in life. Sales suck at her flower shop on this supposed day of romance. Even worse, she has no one to spend it with. Maybe today was made up by greeting card companies. But then he enters. A tall, handsome man she's never met. The sight of him makes her feel both hot and nervous. No one has ever done that to her. She wonders who's the lucky person he's buying flowers for? A girlfriend? A wife? Ava may be naive when it comes to men, but she feels her body ache for his touch. A kiss from his sweet lips. An embrace in his powerful arms. The feel of his warm body pressed against hers. Is he taken? Does she dare ask? A slow and boring business day suddenly became a whole lot more interesting. You'll adore this tale of sweet, first-time romance, because everyone enjoys finding unexpected love. Get it now.

FREE!
Deal available through Apr 16(Price may have changed)

The Boy Next Door: A Standalone Enemies-to-Lovers Romance by Natasha L. Black 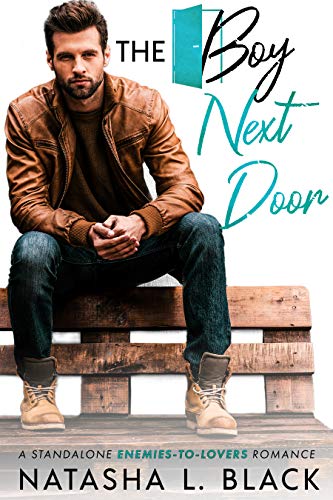 The Boy Next Door: A Standalone Enemies-to-Lovers Romance by Natasha L. Black

What in the world did I do deserve this? The boy next door doesn’t let me sleep. And not just because he's loud... Jayson is a rockstar. He’s as skilled as he is hot. I never thought I’d be attracted to an alpha jerk like him. But Jayson is all I ever think about. I mean, what choice do I have, really? We're next door neighbors for goodness sake. He’s always on my mind (and in my ears). And now… I’m carrying a piece of him. I’m carrying his baby. No, he can’t find out. And no, I’m not saying a word about it to him. Jayson and I are poles apart. Our lives couldn’t be more different. He should be on the road, leaving me behind. Leaving my secret behind. And me? I should start preparing to mend my heart. To raise a baby that will forever remind me of him.

$0.99
Deal available through Apr 05(Price may have changed)

Yours at Yuletide by Josephine Blake 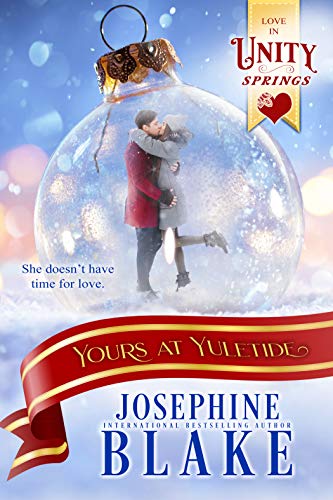 Yours at Yuletide by Josephine Blake

♥ ♥ ♥ “It was like stepping into a Hallmark Christmas Romance... Just what you want for a cold winter's night.” ♥ ♥ ♥ –Bestselling Romance Author, George H. McVey ︵‿︵‿୨♡୧‿︵‿︵ Coming home for the holidays was never supposed to mean falling in love. Charlotte Wilson is in her very last semester of college. Distractions are completely out of the question, which is what makes everything about Oliver Hull a very bad idea. The local firefighter is so far out of Charlotte's league that he should be classified as a different species. Handsome, charming, and dangerously persistent, Oliver is everything Charlotte cannot handle right now. The small town of Unity Springs is overflowing with Christmas Spirit, and Oliver's work at the fire station is keeping him more than busy. Then along comes Charlotte Wilson, and Oliver's aspirations fall to the wayside in his pursuit of just. One. More. Kiss. When tragedy strikes, Oliver and Charlotte's budding relationship is put to an unexpected test. Why does Charlotte keep running away from everything that makes her heart glow? Love and happiness are within her grasp. Is she strong enough to reach out and take it? ︵‿︵‿୨♡୧‿︵‿︵ There’s always something happening in a town as small as Unity Springs. Immerse yourself in a snowy wonderland filled with love and laughter this holiday season as Bestselling Author, JOSEPHINE BLAKE, crafts a BRAND NEW SERIES that will steal your heart and warm your soul.

B is for Boss’s Baby (Office Secrets Book 3) by Annie J. Rose 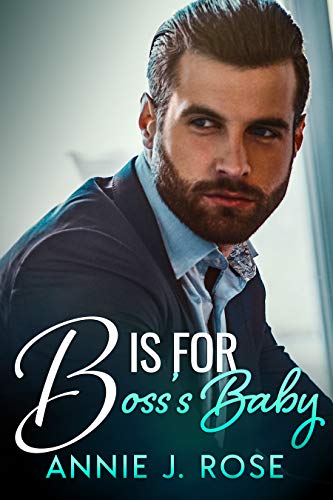 B is for Boss's Baby (Office Secrets Book 3) by Annie J. Rose

He’s my boss. He’s 15 years older than me. Against the rules. Forbidden. Irresistible. My life was already turned upside down. I'm on my own for the first time after being disinherited by my parents. Now I have to go and work for my money. Which ended up with getting a crush on my boss. He's six foot plus of blond Nordic hotness, total alpha male. More than a crush, really. A volcano. Flames, passion, someone who has me erupting. It has to be a secret. No one can ever know. Now we're in Paris together, the most romantic city in the world. Supposedly for our campaign photo shoot... But ends up being one stolen week together. Lost in the throes of passion. I’ve never felt this way before. Then coming back to reality, his ex shows up. I guess it was a one-week affair after all. Except I brought a pastry home not usually made in Paris... A bun in the oven. I'm pregnant. Nik can never know. He has his own life. I’ll just have to go on with mine. Knowing he’s the only man I’ll ever love.

$0.99
Deal available through Mar 05(Price may have changed)

Oliver and Eleanor: Only one season for Love by Vasyl Malyi 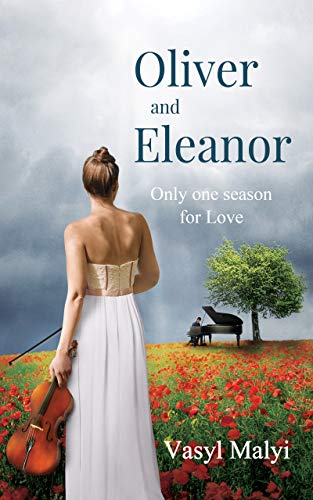 Oliver and Eleanor: Only one season for Love by Vasyl Malyi

Oliver and Eleanor: Only One Season for Love is a novel whose idea came to the author’s mind when he was going to work one grey rainy day. On his way, he was listening to classical instrumental music. There was a moment when one melody finished and another one started. In the beginning, it seemed very simple and boring, just like the weather and his surroundings that day. But then, he clearly saw a picture of a lonely, homeless man on the verge of death, who was playing his unheard-of music for the last time in his life, expressing all the pain that he’s carried through his life, all within just a few seconds. At one point, when the pianist seemed to be finishing and that his life would end with the last note, the author wanted to change the track to something lighter, something that would cause depression and feeling how tragic life was like. But then all of a sudden, at the very end, a violin gently and harmoniously flows into the melody, changing not only the melody itself but everything around. The pianist, who had been sitting alone at the piano in a grey closed room where no sunlight could creep in, suddenly started to see the sun coming up, shining on him and wrapping him in its warm embrace. It was the violin that quietly and carefully broke into his nearly finished melody. It came and changed everything from the melody to the feelings the pianist was experiencing. The two melodies fused into one, as if it was one complete piece of music, although it hadn’t seemed so from the start. The grand piano had sounded so complete, yet the violin was able to join in harmoniously in the middle of the piece. That’s how the idea for Oliver was born. A story about a homeless man who decided to end his life through suicide, unable to bear his life on the streets any longer. After his failed suicide attempt, he went to get out from the rain, escaping unnoticed into an airport. There, he found the grand piano right in the middle of a large hall. He was playing it for the last time, when he met a wonderful, beautiful girl named Eleanor - who turned out to be blind. After hearing the melody about his life, she literally decided to help him and took him to Milan where she was to have a concert. As it turned out later, Eleanor was a talented and world-famous violin player touring the world. Oliver got a chance for a new life. However, he had a secret that he couldn’t reveal to Eleanor, who had just started to trust him. The secret would later come to the surface, telling a story that would explain how such a talented man ended up on the streets, leading such a wretched life.

$0.99
Deal available through Jan 24(Price may have changed)