Tango of Death. A True Story of a Holocaust Survivor: Historical Book for Adults and Teens (WW2. Jewish Holocaust Fiction 1) by Mikhail Baranovskiy 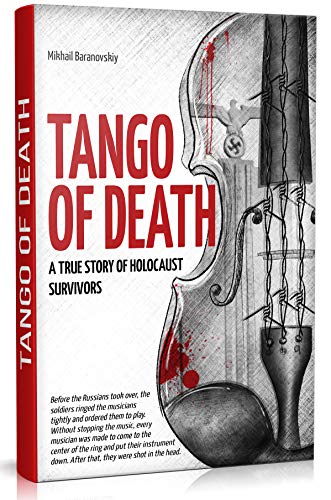 Tango of Death. A True Story of a Holocaust Survivor: Historical Book for Adults and Teens (WW2. Jewish Holocaust Fiction 1) by Mikhail Baranovskiy

Mikhail Baranovskiy weaves a remarkably poignant story of loyalty, betrayal, honor, hope, love, and the effects of enforced mediocrity on talent, based on true events from World War II. Vienna, Austria, 1932. A violin virtuoso and musical genius, Jacob Mund's quick ascent to conducting the Vienna Philharmonic isn't too surprising. With a successful career, adoration and praise from all corners, and a beautiful fiancee, Mund has everything going for him--but that soon changes. With German occupation leading to the total ban of Jewish composers in Vienna, Mund accepts an offer from the Lwow Orchestra and relocates with his now-pregnant wife, Sophia, and a talented musician and close friend, Shmulik. But misfortune catches up with them. Mund's happy days in Lwow, Ukraine, come to an abrupt and unfortunate end when the Germans take over. His Jewish parents are robbed and shot on the streets, and he is shipped off to the Janowska concentration camp along with his wife, his daughter, and the other Lwow musicians. By a lucky twist of fate and with the help of an unexpected ally, his daughter Shera and his friend Shmulik escape the hell of the concentration camp, allowing them a chance to begin life anew. Mund is not so fortunate. Baranovskiy weaves an incredibly powerful and haunting tale that captures the horrors of Jewish persecution at the height of the Second World War. If you enjoyed Born Survivors, The Lost, and All But My Life, then you need to get your hands on this literary masterpiece. A famous writer, playwright, and screenwriter, Mikhail Baranovskiy has been recognized with many literary awards and has authored various children and adult books, as well as numerous television series, including Volkov's Hour, Girls, The Sisters Korolev, and Antique Dealer.