The Jewel of the Glen by Michelle Deerwester-Dalrymple — Crave Romance

The Jewel of the Glen by Michelle Deerwester-Dalrymple 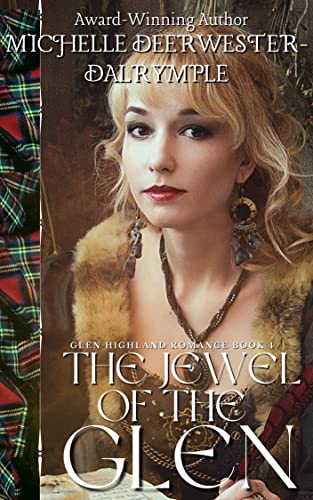 The Jewel of the Glen by Michelle Deerwester-Dalrymple

What happens when a striking Scottish beauty finds herself at the mercy of kings and lords? When Caitrin MacCollough returns to her brother's lands, she believes she has found a safe haven, a sanctuary. A striking beauty, one that is legendary in the Highlands, she attracts attention from everyone, including the king of Scotland, Sir Robert the Bruce. But after a lifetime of loneliness, the pandemonium of Clan MacCollough doesn't sit well with the young Caitrin. To hide from all the chaos, she often hides her looks and retreats to animals in the barn, finding peace and quiet. When the King decides that a beauty such as Caitrin shouldn't be hidden away, but instead used as a bartering chip to make alliances with another Highland chieftain, panic consumes her. With the help of the MacCollough giant, Torin, they embark on a radical, secret plan that amounts to treason. To accomplish this task, however, Torin must give up his own solitary life and do something he hasn't done in years: open his heart to another. They believe their secret plan successful, only they don't know an English Earl has his own plans for the Scottish lass. Amid a rich backdrop of fighting to reclaim a nation and a crown for Robert the Bruce, Caitrin and Torin must rely on each other to survive. Can they open their darkest hearts and find love with one another?