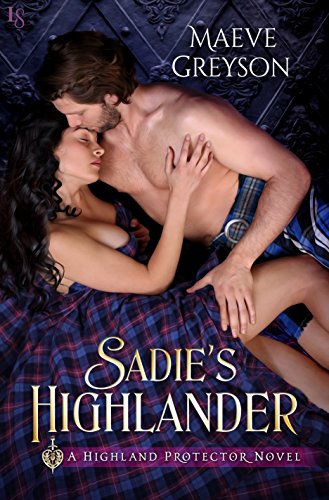 The Highland Protector series brings to life four mouthwatering Celtic brothers in twenty-first-century North Carolina—where the lasses are anything but tamed. Highland warrior Alec MacDara and his brothers traveled forward in time to protect the sacred Heartstone. Their cover? Owners and operators of a theme park called Highland Life and Legends. As the chairman, Alec has been fending off requests to film at the breathtaking property. It’s only because of the charming correspondence from an enterprising production assistant that he agrees to a meeting at all. That’s when Alec meets a woman whose lush curves make him forget, for the first time, all about tenth-century Scotland. A lowly assistant for her sister’s motion picture company, wannabe screenwriter Sadie Williams is shocked when Alec agrees to let them film at the park upon one condition: that she report to him daily. Sadie’s sister always told her that their parents only adopted her because they felt sorry for the ugly little stray. But Alec looks at Sadie like she’s the most tempting creature in the world. And with his gleaming, musclebound body stripped down to nothing but a hip-hugging kilt and boots, Alec clearly knows a little something about temptation.